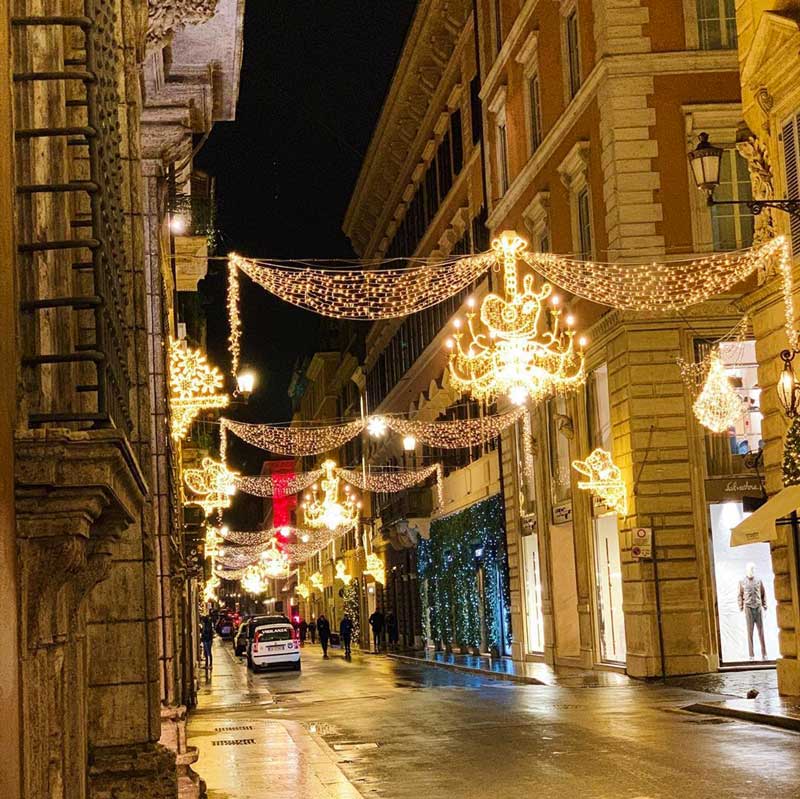 If you are visiting Rome in this period or you are planning to do it, we point out some things that you absolutely cannot miss!

Some places in Rome, already magical in history and artistic beauty, during the holidays become even more beautiful to visit!

In these pre-Christmas days, we were able to admire these places during our e-bike tours, so we point out the absolutely unmissable ones.

Also this year the tall Christmas tree “Spelacchio” was installed in Piazza Venezia.

Netflix has confirmed itself as the official sponsor of the setting up and the promotional campaign. In 2019 the campaign is linked to the promotion of the Klaus film.

At the foot of the tree, in fact, we find the interactive post office and the characters from the film.

Piazza Venezia, in the presence of Spelacchio, is confirmed once again this year as one of the most instagrammable places in Rome, during the Christmas period.

2. A walk under the lights of Via Del Corso

The famous shopping street of Rome dresses up every year.

This year the public competition for the lights of via del Corso was won by Acea, which with a very low energy consumption artistic installation, brings down a shower of lights.

A starry sky will light up your walk through the shops.

The installation is called “Roma by Light”.
“About 190 kilometers of optical fiber were used, 115 light beams consisting of 300 light tails, capable of reducing the daily energy consumption of the installation by 45%, and 10 LED screens of four by two meters connected to one App” (da www.romatoday.it).

Historical films set in Rome are shown on LED screens. By downloading the ROMA BY LIGHT ACEA ™ app you can get more information on the scenes of the films.

3. The illuminations of Cartoon Network in Via dei Condotti

Continue the walk in via dei Condotti, another of the most beautiful streets in Rome at Christmas.

Here you will find a completely different kind of illumination, compared to Via del Corso.

Like last year, these lights are curated by Cartoon Network and represent the most popular cartoon characters and shows of the channels of the well-known television station.
The characters are inserted in the structure of the lights to form classic style chandeliers, in line with the elegant style of the street.

4. St. Peter’s Square: the crib and the Christmas tree

This year the crib in Piazza San Pietro comes from Trentino, precisely from a small town in the Valsugana, Scurelle.

The Nativity scene is made up of 23 wooden characters at natural height. Some of the characters represent ancient characters and crafts, typical of the country of origin.

“We have placed in the crib pieces of trees torn by the Vaia storm, with the hope that our woods will be able to recover”, which recently hit the area.

The very high Christmas tree, decorated with lights and golden balls instead, comes from the municipality of Rotzo, on the Asiago plateau (Vicenza).

5. New Year’s Eve at Circo Massimo and Lungotevere Aventino: the feast of Rome

The Roman New Year is now confirmed not only to be a concert in the square, but is a series of engaging events, for young and old, located in various locations.

The events will begin at 19 on 31 December 2019 and will end at the same time as 1 January 2020. They will be located in various squares and streets of the city between the Lungotevere Aventino and Circo Massimo.

An excellent way to not miss anything of the places and events listed above is to rent an e-bike that will allow you to get around the historic center facilitating your travels.

Or you can book an exclusive e-bike tour with our guide, who will accompany you to walking around the city, telling you stories and important and funny episodes of each point of interest.

With an e-bike you can explore all these locations easily in one day, without fatigue (thanks to pedal assistance), without traffic problems and parking in Rome!

Also under the Christmas period you can take advantage of the special discount of -15%.
The discount is active on all our tours, rentals and other services, until January 6th!

Activate your discount by entering the “starchris” code during the purchase!

More info on the offer during the Christmas period!