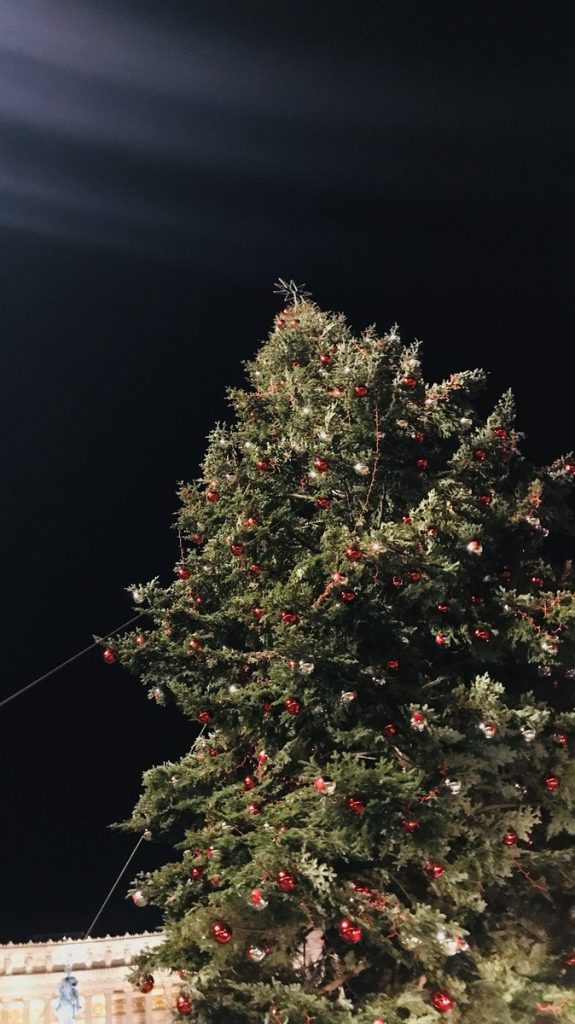 5 things to do absolutely in Rome during the Christmas period

The magic of Christmas has always fascinated young and old, and fills every place with a unique atmosphere.

As in any city, however, there are decorations that exceed expectations, making some places UNMISSABLE, both for tourists who come for the first time in Rome and for roman citizens, who can admire them in a whole new look.

Here is a list of magical places for Christmas 2021 in Rome, which we visit during our bike tours.

Thanks to a Netflix sponsorship, it has grown notoriety and 10% visits to Piazza Venezia. During our bike tours, a picture with the famous tree, even just to insert it in their social profiles is now a ritual!

Spelacchio is the name given to the Christmas tree of Piazza Venezia in 2017 by the Romans.

The tree was visibly dry, and although embellished with lights and various decorations, was certainly past its prime.

He became famous for being heavily criticized in Christmas 2017, becoming a mascot for Rome.

This year, thanks to the amusing advertising campaign sponsored by Netflix, at the lighting of the 60 thousand LED lights of the new Spelacchio, there were between 10 and 20 thousand people in Piazza Venezia.

2. LUMINARIES in Via dei Condotti: Cartoon Christmas Light by Cartoon Network and Boomerang

The illuminations of Via dei Condotti in Rome this year are inspired by the Cartoon Network and Boomerang Top Shows: Tom & Jerry, Tweety and Silvester, Ben 10, Scooby-Doo, The extraordinary world of Gumball, Adventure Time, The Powerpuff Girls, The Happos Family!

The faces of the famous characters crown classic chandeliers, in harmony with the elegant style of the street.

Obviously, the best time to admire them is after sunset. In our evening bike tours you can admire them in their full splendor!

The “Sand Nativity” realized with the original Jesolo sand of the Dolomites, required a careful work lasting weeks by four sculptors from different countries.

Together with the Christmas tree in the square, the nativity scene was given by italian regions of Veneto and Friuli Venezia-Giulia.

Piazza San Pietro is an unmissable stop on our tour in the center of Rome, but the Christmas dress of the square makes the stage even more interesting: the crib is a unique monumental work of art, to be seen only until January in Rome.

One of the classic places of the Roman Christmas. From the beginning of December until January 6th. Craft stalls, Christmas tree decorations and cribs, decorations and sweets surround the famous fountain of the 4 rivers of Bernini, in the frame of the nineteenth-century buildings.

Our advice is to get off the saddle of your bicycle (also because in the square during the Christmas period it is forbidden to use bicycles to avoid accidents).

In addition to the stalls, stop at the numerous shows of street artists, jugglers and portraitists who populate the square; Taste the huge fried food don’t miss a bite of the characteristic haunted apple!

In the streets nearby the square, there are also other interesting initiatives such as concerts for mandolin, gospel and ethnic music in via dei Coronari or the toy show in via dell’Orso.

Finally, as a magical place for Christmas, do not mention the walk along the famous Via del Corso: Christmas lights and decorations from stores of the most important brands, animating the street.

In the famous street that leads from Piazza del Popolo to Piazza Venezia you can often meet Zampognari (typical wind instrument players) and sellers of roasted chestnuts.

Walking around you can hope for sudden appearances of Santa Claus, hired by the many local businesses!

Walking towards Piazza Venezia is also impossible for us, do not stop in the Galleria Alberto Sordi: Over 10000 LEDs for Christmas decorations.

But not only: Inside the gallery a temporary store dedicated solely to Christmas items: Mr Christmas.

The shop was born from the passion of a group of young people for the most important holiday of the year. Mr. Christmas offers unique decorations with ideas taken during trips around the world.

Christmas in Rome, Place to visit in Rome, Rome by bike, Things to do in Rome, Visit Rome